Change is Possible with New BFFs! 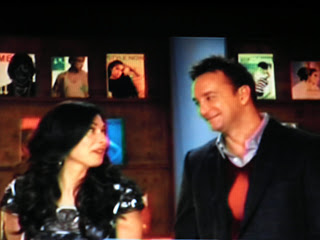 I found myself depressed, discouraged and thinking I was to live with the woman in the picture. For some reason, I was stagnant. I did not know if change was possible, and became another Scarlett O’Hara….I would think about it tomorrow! Five months later, my teenage daughter told me to watch a funny show with her, TLC’s What Not to Wear. I thought I was joining my teenager in a fun, fashion experience, but soon realized (with great horror) that many of the women, hosts Stacy and Clinton were ridiculing, dressed exactly like me. I began to keep a checklist:
* Tapered capri pants
* Oversized tops
* An over abundance of polyester
* Light colored…just bad….denim
* Hand me downs from my elderly mother-in-law
* Styles from the 1980s
* Clunker shoes
* Many exotic, Goodwill finds
and Finally, the one I think they hate the most:
* Holiday sweaters
They were all there in a messy, packed out closet which officially made me a schizophrenic. I confess, I felt very overwhelmed sitting in the floor of that closet, but at least I had a starting point. What Not to Wear became my new college class and Stacy & Clinton my new best friends.
They had now opened my eyes to change and given me a place to start. It would be awhile before I believed change was possible and as I said this is a journey..not one big jump. We had many obstacles to confront, but I had two new friends to lead the way for now. From this point on, when I refer to something that I learned on the show, I will designate it as S & C 101. I want to make sure they get the credit….as any BFF should. Today, ask yourself this:
Are you ready for change?
Are you willing to change?
Don’t use excuses….it will not cost Fifth Avenue Prices….or take all of your time….or be self indulgent…. all ages can be helped…all body types…and, the best part, it will give you confidence and strength!

Even Jessica Rabbit is amazed at how great this ne

Time for Happy Hour! End your week with the creati

Thank you to the great staff @oakhavenmassage on B

Talk about a wonderful surprise...I ate for the fi

Happy Tuesday! I am on the blog today discussing h