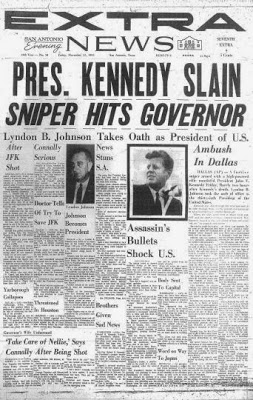 I wasn’t a big fan of the school cafeteria in fifth grade.  I always stressed over the
food…where to sit…was the boy I currently crushed on ignoring me…feelings of
inadequacy…and then one day a significant moment.  I was in an argument with another girl when
the principal interrupted our lunch to tell us President John F. Kennedy had
been shot and it had happened in Dallas just a couple of hours away from where
I lived.  Women serving food began to
cry. A teacher fell to a chair and held her head.  For a moment, all of the typical lunchroom
activity stopped…silence…then sobs.  Why
Texas?  I heard these words spoken over
and over again…why did it have to be Texas?
I was ready to process through this moment with my parents,
but upon pushing the screen door open after school, I knew immediately my
mother wasn’t ready to talk.  Her eyes
were bulging red and the bust of President Kennedy which sat at the top of a
bookcase had been moved to the kitchen table.
Her loyalty to the young President had annoyed my father, who did not
vote for him.  She didn’t care.  She often quoted his speeches and loved every
outfit Jackie modeled. She was caught up in the story of Camelot.  Her grief that day was as deep as if a family
member had passed away suddenly.  “Why
would anyone want to shoot such a great man,” she sobbed.  “I just don’t understand.”
She sat and wept with Walter Cronkite, the only man in our
home who shared her deep grief.  Our
close knit neighborhood all seemed uncomfortable about the attention to Texas
as the site of the assassination and as the home of the new President.  The “Why Texas?” theme was said over and over
again.
The mothers of my school friends sat around televisions,
some smoking cigarettes, some drinking hard liquors lamenting over what all of
this meant for America. Scenes eerily similar to those posed for Mad Men.
I remember one of them so fearful Russia was going to attack our country
as they listened to a possible Russian connection to shooter Lee Harvey Oswald.
We watched the funeral. Mother cried when John-John saluted.  For days, a heavy cloud of doubt and fear hung over everyone.
Eventually, the bust went back to the bookcase. The
lunchroom remained intimidating, and my mother esteemed President Kennedy until
she fell for Ronald Reagan.  Then she
never mentioned the assassination again.
But, those moments when an entire nation wept together will forever
remain with me.  For during that time,
there were no Democrats, no Republicans, just Americans who lost a family
member they loved.

Today’s post is part of a link up from the ladies of Midlife Boulevard.  You may read the other posts HERE.