During the time of the Roman Empire, purple cloth was worn by royalty…the people in power. While that might make some of you cringe and hate what was worn by the “privileged,” I prefer to look at it as the color with power. So, I want to flex that power a little and join in with the ladies at Southern Comfort to raise my voice against Domestic Violence.

My heart is particularly with those abused verbally…because though a fist may not touch a face, verbal abuse is just as harmful, hurtful, and deadly. Many women will tolerate verbal abuse longer, because it is not physical, not realizing the damage it is doing to them mentally or to their children.

I once knew a little girl. She lived in a home where screaming, fighting, demoralizing, and ugliness were on the daily agenda. At five years of age, she would run to the front porch of her home, hold her knees to her chest, rock back and forth, and pull every eyelash out of her eyes. It was a nervous reaction to the tension in her home. But, of course, no one knew that. As she grew, she turned to music, reading, and writing for escape….but, continued to pull every eyelash out. She did not want anyone to know that it was by her own hand, so she endured all of the doctor’s appointments her mother scheduled in an effort to find why the eyelashes were “falling out.”
Look in her eyes…really look in her eyes….but no one looked to really see. 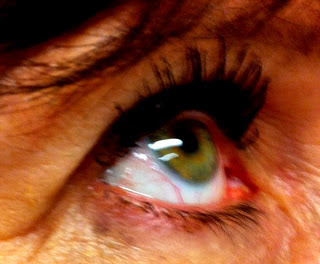 She endured her mother rubbing Vaseline on her eyes every night….doctors said that lubrication would make the lashes grow. She endured her father telling her that she was a mental case and weird in his eyes.

But, one day a revelation occurred. It happened a few weeks into her freshman year at college. She stared into a mirror to see new eyelashes growing….thick and untouched. At that moment, she realized, “I’m out of the house. I am going to be OK.” 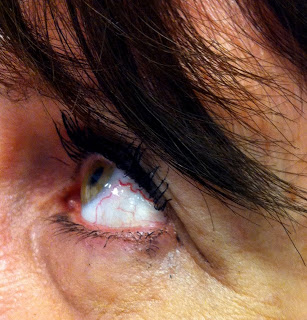 Her mother did not fair as well. She not only endured the verbal abuse from her husband, but she had been raised in it under her own alcoholic father. After years of hearing, “You are so stupid,” “Shut Up,” and “I will leave you penniless and spend all of our money on my pleasure,” she is now penniless…dependent on Social Security to live…and an angry, bitter woman.

Yes, this is my story. Verbal abuse is that invisible sword which plunges deep into a heart.  Why do I put such an intense testimony on a fashion page?  To help remind you…I overcame the abuse.  It took the grace of God and support of many, but I am an overcomer. So, reach out.  Help those you know who live under it. Help them to see it is not their fault and they have much to offer. Help them to have the strength to walk away. Help them, so that at age 86, they will not be wasting away, eaten up by anger.

And if you want to join the rest of us in taking a stand against Domestic Violence…then pull out your purple and your voice….make sure your link back to Southern Comfort Painfully Aware