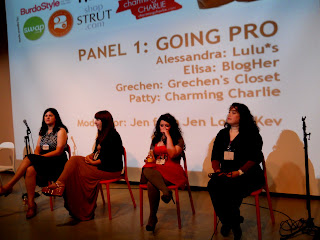 TX Style Council Bloggers Workshops:  Moderator:  Jen of JenlovesKev
Panel:  Alessandra & Stephanie of LuLus; Elisa, co-founder of Blog Her; Patty of Charming Charlie; and Grechen of Grechens Closet
This is a session where all of my pre-conceived ideas were thrown out the window.  For example, I thought bloggers contacted companies and offered their blog up for a price to promote a product or company….WRONG!  In fact, we should never do that.  I thought the name of the game, at least where businesses were concerned, was to increase numbers…again WRONG!
This panel confirmed businesses are looking for much more than numbers.  They want someone who builds relationships with readers and focuses on their audience.  They want someone with a unique point of view who has established themselves in a particular area as a representative (voice) or as an expert.  Patty from Charming Charlie confirmed that they look for someone who has the ability to be a consultant in one area.  Grechen said, “While traffic is important, it is more important to build relationships with loyal readers over time.”  She highly recommended asking questions in a post to engage your readers.   Grechen is a blogging fiend…she maintains six blogs with great success and has established a blogging career….I had to bow before her, because it is so much time just to maintain TWO.   At this point, I cannot imagine maintaining six!
The panel did recommend that if there is a particular brand you are associated with to go ahead and contact them and let them know about your work.  Don’t start off asking for money. Also, everyone should avoid the many mass mailings some of us find in our inbox for random products…. do not sell yourself short and take just any offer that comes along.  Be picky and only go with product promotion which represents you and your audience.
During the Q & A session, Erin from Work With What You’ve Got you’ve got asked a great question…”What is a Reasonable First Step if you want to take your blog professional?”   The answer seemed to center around developing a Media Kit which businesses could find on a page at your site.  IFB has guidance for developing a Media Kit on their site, How to Create Your Own Media Kit.  But,as I mentioned before, the best answer to Erin was a jewelry designer who spoke up and told her to get in touch because she wanted to advertise on her blog…she was familiar with it and impressed.  Score for networking at a blogger’s conference!
What else do bloggers do at a conference?  They work, of course: 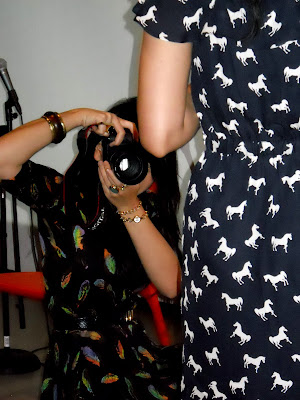