Gigi and I had so much fun Saturday afternoon as we headed out in the rain (YES, I SAID RAIN!!) to see Tim Gunn at La Cantera Mall. This was an incredible way to kick off San Antonio’s fashion week with a Tim Gunn appearance and casual chic fashion show…all courtesy of Lucky Brand Apparel at La Cantera Mall. We arrived early to grab a good seat and Gigi provided Starbuck’s and protein plates to enjoy while we waited.

Retired teacher, Diana Larson, was content to sit for over an hour before the show in order to get close to Gunn, another teacher she admires. “I think so much of him,” Larson said. “He really knows his stuff and he is always so nice. He is not hard at all on any designers on the show.” At sixty two, Larson has traveled and lived around the world and believes that American women have a lot to learn from someone like Tim Gunn. “European women have the knack, the know-how with style. Without much effort, they seem to know how to be simple and look fabulous. But, American women just buy and buy a lot of clothes and then do not know what to do with them.” She also was grieved that too much casualness has crept into American fashion.

But, looking your casual best was what this fashion show was all about. Many “real life” models hit the runway to represent all phases of life in denim. Gunn even modeled a pair of dark denim jeans and confessed that San Antonio was one of the only audiences to see him in jeans. He took time to teach his principles about the importance of silhouette, portion, and fit. “Everything in your closet should be transition pieces; accept, your wedding dress, of course,” he said. “A well fitted jacket is the best piece anyone can own,” Gunn advised and encouraged everyone to keep a blazer on the back of a chair at work so you can have it to pull on for a polished look if the boss walks into the room.

After the show, he took audience questions, so I absolutely had to ask one for all of us 50+ fans. I asked him if he was experiencing more designers coming back to fashion like Peach and Bert on Project Runway. “Yes, I am seeing more over fifty individuals get back in the game on Project Runway,” he said. “It was six months after my fiftieth birthday, when the producers of Project Runway asked me to come on board.” He said many are finding a whole new threshold at that time of their lives. “It is the time to get active and do what you love…not shut down,” he said with his usual encouraging manner. “I celebrate 50.” I was pleased that when I identified myself as a blogger for women over 50, there was a lot of applause from the audience…so I think many of us where in attendance.   Fellow blogger, Audrey Bella was at the event and did a video of me talking with Tim…here’s a picture she emailed (Thanks sweet lady!!) 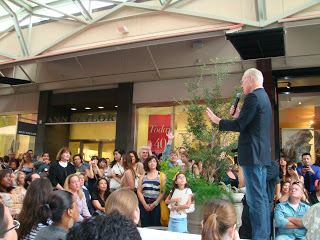 A few Tim Gunn-isms from the afternoon:

*I can’t tell you who my favorite designers are from the show…they are like my kids.

*I am writing a book on fashion history….so many others are just a snooze fest….and I want to write this one from the perspective of what is in a woman’s closet. Because I love the history of draping, I would love to have dinner with Cleopatra.

*I grew up in Washington D.C. with a very fashionable mother, grandmother, and great aunt; but I originally wanted to be an architect.

*The more volume you wear, the more body it looks like you have.

*His favorite challenge on the show was in Episode 1, Season 1 in the grocery store. When he saw Austin Scarlett with all of the ears of corn, he thought, “Oh, that poor soul, he’s going home for sure.” Austin also got a whole cart of potato chips which we never saw on camera, and told Tim they were for the ride home!

* Jeans should be worn mid-rise for the most flattering look. Skin should never be seen above the waistband.

*When asked which designers he liked the least, Tim said that it is all about character….the ones he obviously believed had less of it?….well, here’s the hall of fame you least want to be in…

Season 6….Gretchen Jones (I guess we know who Tim thought should have won!!)

He asked the audience who they liked least right now and there was a resounding cry for Joshua, and a few not loving Viktor. Tim smiled and said….Stay Tuned.  Hmmm…could one of these guys be the winner??

Finally, he left the crowd with the wave of his hand, a familiar smile and MAKE IT WORK!!